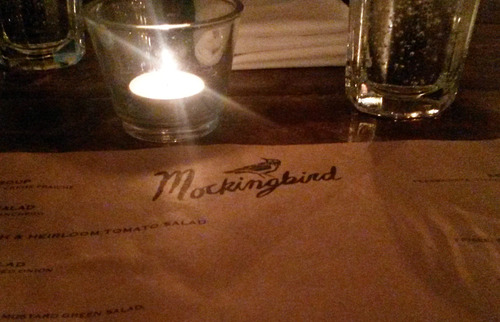 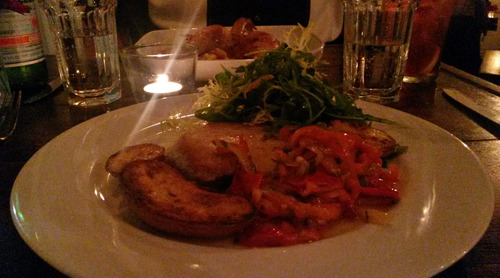 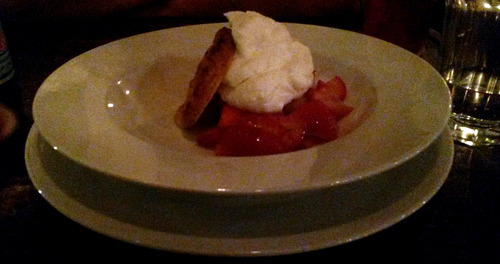 Mockingbird is romantic and classy. This New American restaurant is definitely date night worthy. The dim lights and mood lighting can put one in the mood (hence the dark pictures).

I feel so uninspired to write this post because the food did not meet my expectations.   Having a string of casual dinners lately, I wanted something nicer and a little bit more upscale but we did not want to drive to the City.

Mockingbird was a random choice.  We had the following:

I was excited to try this thinking that it would be similar to Marlowe’s (SF) fried brussel chips which were addicting. However, what I got was a generous portion of sauteed brussel sprouts which were not crispy at all. Great as a side dish but not as a starter. I finished the whole plate which could be blamed for ruining my appetite for the entire meal.

Two discs of pork resembling crab cakes which were crispy on the outside and gooey on the inside. Pretty good but the kimchi overpowered the taste.

Ahi Tuna is among my most favorite dishes. The hot seared crust with the cold temperature of the fish was weird to me texture-wise. I was not happy with my dish. The BF was lucky that he played it safe with the roasted chicken. He said that it was juicy and flavorful.

Even the dessert did not bring me to my happy place. It was not bad but it did not stand out.

$108 including bubbly water and tip

Not a bad dinner but was disappointing. Service was very friendly. Portions were generous and price point was great. No alcohol is served but they allow BYOB at no charge. Maybe if we had brought a bottle of wine, it could have been a different ending. Oh, well…..